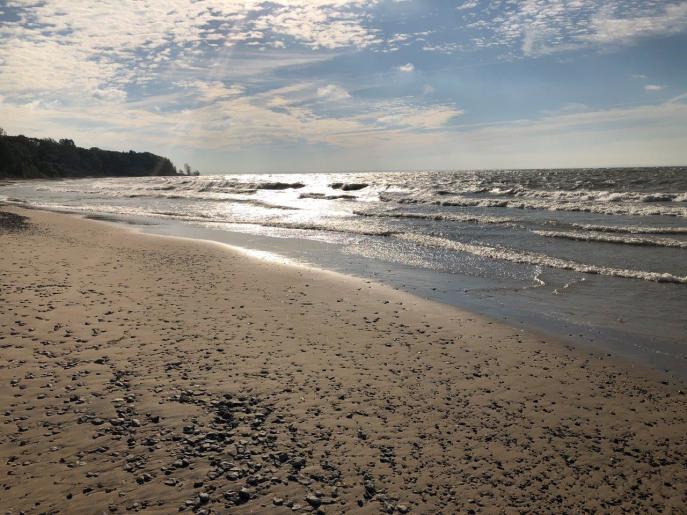 In 1897, Buffalo real estate broker Frank Fulton Brown found the perfect spot for a summer resort just a few miles east of Port Colborne, Ontario.  He purchased from two local farmers 40 acres of land along the Lake Erie water front and subdivided them into 26 lots.  The community was legally registered with Humberstone Township as Plan 19, but Brown decided that for common usage he would name it after his daughter, Lorraine.  To populate his resort, he recruited friends from Buffalo, among them Walter, Edward Webster, and Jesse Chase Dann.  Over the years they were followed by others whose names were familiar to Buffalo residents of the day, such as E.B. Green, John Jewett, Ralph and Julia Cary Plumb, and Albert Bent and Lusyd Magee Wright.

Originally Lorraine consisted of just the properties west of the drain, but in 1908 others from Buffalo started to purchase property, extending the community east.  Frederick Pope, a retired inspector of hulls, was first with 100 acres abutting Pine Crest.  James L Crane purchased over 50 acres that included the chambers farm next to the Weaver Road.  The Colman Curtiss family acquired 50 acres between Pope and Crane.

Before the advent of the automobile, these pioneers had to be determined to reach their summer property.  Whether they decided to go by horse and buggy, or by train, they had to ride the ferry across the Niagara River, go through Canadian Customs, and navigate the primitive roads.  Even the train passengers stopped at the station on the Lorraine Road, still over a mile and a half from their houses.  The journey could take an hour or more.  The legacy of these pioneers can be seen throughout the community.  On the west side, several of the original houses still stand, including the 1897 Brown House next to the Lorraine Road.  The nearby gates mark the entrance to Lorraine.  The iconic bridge, built from material gathered from the beach around 1912, still takes people across the drain.  Remains of the gates on Weaver Road define the beginning of the original Crane property, which ends at a second set of gates just after Poison Ivy Lodge on old Firelane 2.  Still standing are the original 1894 Chambers farmhouse and the 1912 Crane house on the hill.  Remnants of the Pope barn are visible on the Goodwin property.

As delightful as the reminders of days gone by are, they are not the most important legacy from the initial settlers.  From the beginning, Lorraine was a community of people trying to find a way to maximize the enjoyment of the summer.  They joined together and started traditions, many of which endure to this day, including parties and holiday celebrations, tennis matches, and softball games.

Lorraine was not without a "government" . Walter Dann became the first mayor of Lorraine in 1911.  His duties were few.  Nephew Rad Dann took over the office upon Walter's death; his main responsibility was to hand out candy to the kids after the Labor Day tennis tournament.  Although there is no record of a prior association, in 1950 there was an attempt to "revive" the Lorraine Association, the issue - how to keep outsiders from trespassing.  The residents decided that a loose organization was sufficient.  In 1956, a committee for entertainment was formed charging a yearly fee of $12.  The current Lorraine Association started in the early 1960s.

Today the Lorraine Association, in addition to planning and managing a schedule of the fun summertime activities, oversees a number of issues of concern to the community at large.  These include the collection of dues and disbursement of expenses for summer and winter maintenance of the private roads and the purchase of insurance coverage for the community.  The Association also acts as a clearinghouse for matters of interest to Lorraine property owners and their families, such as water quality, garbage collection, road safety, signage, and emergency access.

Over the years, there have been numerous changes in Lorraine.  Homeowners have come and gone.  Some traditions have been dropped or altered, or replaced by new ones.  Today the community is a congenial mix of Canadians and Americans, full-time and seasonal residents.  But through it all Lorraine has remained a community, a place where residents, new and old, can come together and enjoy the summer.

You have an opportunity to be a part of this community steeped in history, and still bursting with life in this beautiful part of Ontario.  The original 1918 "Gate House" located at the entrance to Firelane 2 at Lorraine Bay is a charming Cape Cod style home, sitting on 2.4 Acres, just steps from the beach.  Fully renovated with Coastal Contemporary styling, this property is ready to move in, and enjoy Lakeside living at its best.

Check out the full listing at the link below

The 468
Your Local Newsletter

The easiest way to stay in touch….. Sign up for “The 468”, your local newsletter to stay up to date with everything going on in the area!